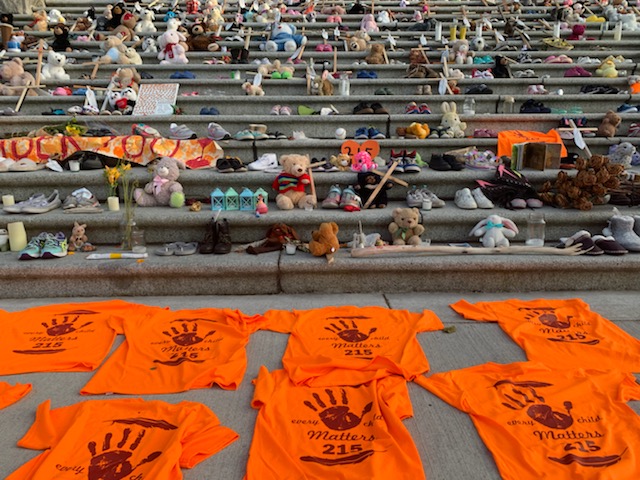 Canada Day, 2021, Victoria BC: When Our Neighbours are Suffering It’s Not the Time To Celebrate

Children’s shoes, stuffed toys, and 215 orange children’s shirts on the steps of the BC Legislature. The shirts were laid after a ceremony hosted for island nations by the Songhees Nation Tuesday June 8th.

This past week Council voted unanimously to move a planned Canada Day broadcast from July 1st to a broadcast that will air later this summer. It will be guided by the Lekwungen people and feature local artists and musicians and will explore what it means to be Canadian, in light of recent events.

While there has been strong local support for this decision, there has also been some backlash from across the country. The backlash tells me that we have a lot more work to do as a country to understand what reconciliation actually means. Reconciliation is about relationships. And it is place-based.

Victoria City Council didn’t #CancelCanadaDay. We weren’t responding to social media campaigns. And no one actually asked us to rethink what we had planned for July 1st.

Staff recently met with long-standing Lekwungen participants in the Canada Day celebrations in preparation for this year’s event. They told staff that they wouldn’t take part in Canada Day celebrations this year, in light of the 215 children’s bodies at the Kamloops Indian Residential School discovered so close to July 1st, and the pain and trauma this is causing.

Here is what Lyla Dick, a lead singer in the Lekwungen Traditional Dancers told the Times Colonist:

“The group withdrew from the planned broadcast out of respect for her mother, a residential school survivor and the ‘backbone’ of the dance group, and all those who attended the schools. Dick said her uncle, who attended the Kamloops Indian Residential School, has been hit particularly hard by the discovery.

“‘Because what’s happening with our survivors right now is the years of suppressing all those memories, it’s like the wounds have opened back up … In our communities, we’ve known all along that there was losses throughout the years. I remember my grandpa hearing of his sister being pushed out the window … I remember stories of my mom’s brother, his punishment in Kuper Island. And mum today just told me about the punishments my dad received when he was in [residential school]. So it’s been known all these years, but not really openly talked about’.”

I had been discussing with staff how to incorporate recognition of the 215 children into this year’s Canada Day event somehow. But until I heard from staff that the Lekwungen people were too grief stricken to participate, I hadn’t considered recommending to Council that we rethink Canada Day this year. I’m not sure how I thought that somehow we could proceed with business as usual, even as the history of our country’s genocidal relationship with First Nations had been once again revealed in a way that is painful for the Lekwungen people, for First Nations across the country, and for many non-Indigenous Canadians.

The more I reflected, the more I understood that holding the usual Canada Day celebrations would be damaging to the City’s and the community’s reconciliation efforts. For the last four years, through the City Family, the Witness Reconciliation Program and the Reconciliation Dialogues, we’ve been building close, heart-based and healing relationships between the City and the Songhees and Esquimalt Nations. How could we have a celebration when our neighbours – on whose homelands the City was built – were suffering? And how could we hold a Canada Day celebration without the Lekwungen people who have been part of the event for the last decade?

As First Nations mourn, and in light of the challenging moment we are in as a Canadian nation following the discovery of the remains of 215 children, Council decided to take the time to explore new possibilities this year. In our decision, we noted that everyone will mark Canada Day in their own way this year, with some choosing to celebrate; that is the freedom that a country like Canada provides. But for Council, now is a time where the City can take leadership and provide an opportunity for thoughtful reflection and examination of what it means to be Canadian in light of recent events and what we already know about our past.

For a broader perspective, here’s an interview I did with CBC’s Carol Off on As It Happens Friday evening. (Interview starts at 1:47)