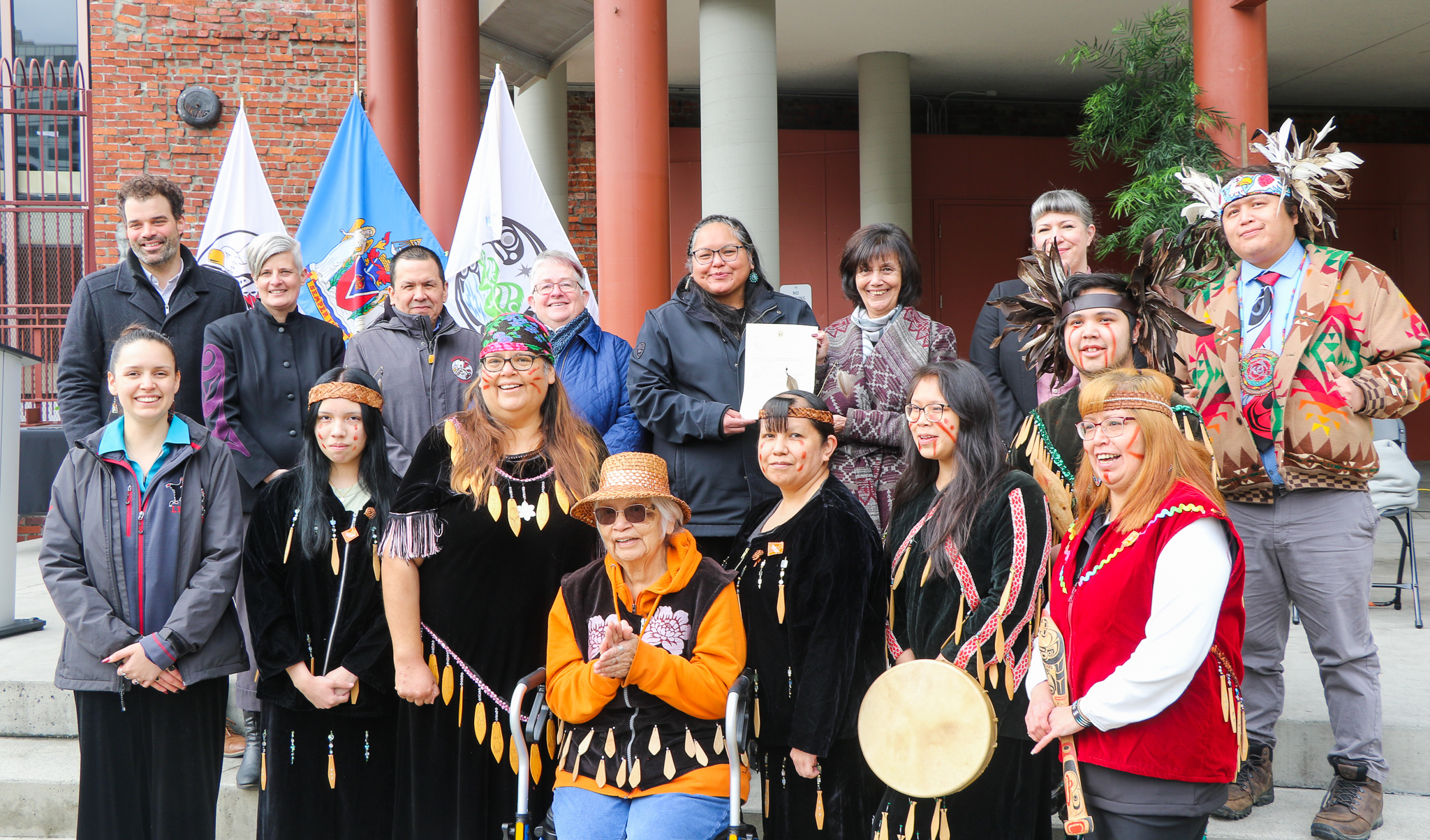 When we began the reconciliation process, we went to both the Songhees and Esquimalt Nations and asked if they would like to participate in a reconciliation task force. They kindly told us that a “task force” was a colonial structure and suggested instead that we create a family, as the family is the unit of governance in Lək̓ʷəŋən culture. So we created the City Family, and set out on our journey.

Over the past five years, the City Family, as well as Victoria Council and Songhees and Esquimalt Councils, have shared food and ceremony. We’ve deliberated and made decisions together. We shared a private box when Victoria hosted the World Juniors, and we were all thrilled when a young Songhees member was broadcast on the large screen in the arena, doing the floss!

We co-created and co-hosted the Victoria Reconciliation Dialogues to share our learnings and Lək̓ʷəŋən teachings, culture and ceremony with the community.

We gathered together and wept together when the first 215 bodies of children who died in residential school were discovered in Kamloops last summer. And together we decided to postpone Canada Day celebrations, as Lək̓ʷəŋən elders were grief stricken and unable to participate.

We worked together on the removal of the Sir John A Macdonald statue from the steps of City Hall in the summer of 2018. We did this to make Victoria City Hall more welcoming and inclusive for Indigenous members of our community. And we stood together in the summer of 2021 when the statue of Captain Cook was toppled in the inner harbour. We unequivocally denounced the tearing down of the statue, the vandalism to churches, and asserted that we will get further by standing shoulder to shoulder than by tearing down each other’s cultural symbols.

Songhees and Victoria staff have worked together on park re-naming, street re-naming, the gathering of elders’ stories to share in the new Songhees Park extension that will open this fall on the west side of the Johnson Street Bridge. They’ve collaborated on the design of the Lək̓ʷəŋən Plaza as part of the Government Street Refresh project. And so much more. They too are developing relationships with each other.

We’ve made lots of mistakes along the way. And each time we do, we’ve been lovingly yet firmly corrected. The ongoing generosity of the Lək̓ʷəŋən people, despite everything that has happened during colonization, which continues to this day, is humbling.

This years-long collaborative process – “Na’tsa’maht”, which means, “We are one,” in lək̓ʷəŋiʔnəŋ – brought us to last Friday, when the Songhees Nation and the City of Victoria held a public ceremony in Centennial Square. The ceremony marked an important next step in the return of Lək̓ʷəŋən land as part of the Songhees Treaty negotiations which began in the 1990s.

In a show of solidarity with the Songhees Nation, the City provided a formal letter supporting the Songhees’ Treaty Settlement Lands within City boundaries. (See below.) Although the treaty negotiations with British Columbia and Canada continue, this represents a significant step in the Treaty process. The Province and Canada consult with local governments when considering the return of lands within municipal boundaries to First Nations as part of the Treaty process.

Municipalities can either get in the way and object to the land back proposals, or we can stand by and support. We’re choosing to stand and support because we know this will assist the Songhees in their negotiations and help bring the decades long Treaty process to an end.

When a nation acquires lands as Treaty Settlement Lands, it means that they own the lands outright – unlike reserve lands – and that they are not subject to local government zoning bylaws or the City’s Official Community Plan. In essence, Treaty Settlement lands are a recognition of the right to self determination and self-government.

This is what Songhees Chief Ron Sam said in a joint news release from Songhees Nation and the City:

“Today we celebrate and honour Mayor Helps and Council in their efforts to rebuild the relationship with the Songhees Nation. We appreciate their support in our mission to negotiate return of our traditional lands in Lək̓ʷəŋən territory through Treaty, and for their unwavering commitment to working government-to-government with our leadership over the years.  It is a truly historic day, and we look forward to continuing our respectful and valuable relationship to benefit all families who live in Victoria and the surrounding area.”

To hear more from Chief Sam please watch this terrific CHEK news story. To learn more about the history of the Treaty process, please read this excellent CBC story.

Before each public meeting, we acknowledge that the City of Victoria is built on the homelands of the Lək̓ʷəŋən speaking peoples. To be meaningful, reconciliation needs to be more than land acknowledgements. Reconciliation must be accompanied by decolonization and decolonizing practices. So when the Songhees asked that we stand with them and support them in their treaty negotiations to reacquire land that was wrongfully taken from them – land in the heart of their territory – Council voted to do so.

We did so because we cherish the opportunity of working towards decolonization and addressing the wrongs of the past by supporting the Songhees Nation in their efforts to get some of their land back. Over these past five years, we have built a strong relationship with Chief Sam and his Council that we value very much. It is this relationship that will lead to meaningful reconciliation between the City and the Songhees Nation, to the benefit of their members and our residents.

We understand that Songhees Nation is negotiating a land claim agreement under the British Columbia treaty process through the Te’mexw Treaty Association to acquire the following lands as part of its treaty negotiations:

The City looks forward to developing the foundational framework for establishing the collaborative working relationships and servicing arrangements between our two governments in anticipation of the lands becoming Treaty Settlement Lands. We view this collaboration as an important aspect of the reconciliation process.

Please do not hesitate to reach out should you have any questions. Sending my best to you and all of our colleagues at Songhees Nation.